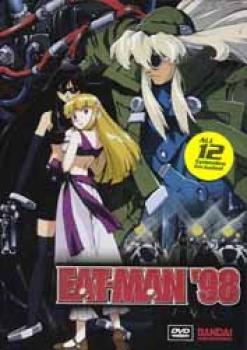 Now you can experience the first adventures of the astounding Eatman in glorious DVD format! <UL><LI>Audio: Japanese and English<LI>Subtitles: English<LI>Running time: 300 minutes<LI>Region: 1</UL> 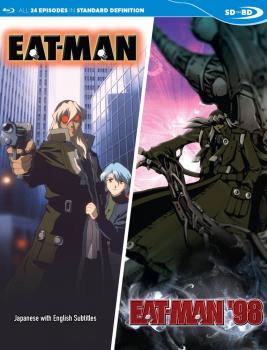 I liked Eat Man from the first second I heard about it. A mercenary which can eat weapons and let them grow out of his hand? COOL!
And I was right. The series is cool! Bolt Crank is the coolest mercenary I've ever seen. He never loses control and is always master of the situation, no matter what.
In the second Anime it isn't different. He is always cool and always master of the situation.
What I don't like is, that the anime is not like the manga. There are other stories and in my opinion they are not as good as those in the manga chapters. (but they work the same way: a nice girl and a hard mission *g*)
When you compare this to the first Anime of Eat Man it is better. The Animations are better and I like the style a little bit more. The soundtrack is nice and the voices suit the characters.

All in all: it is good what they made, but is not as good and as cool like the manga. it would have been better, if they made the Episodes like the Manga chapters. Then you know the content, but I liked what I've read.
Although the anime is good and every fan should have watched it. It has it's little weaks, but you can see over those and enjoy the anime.