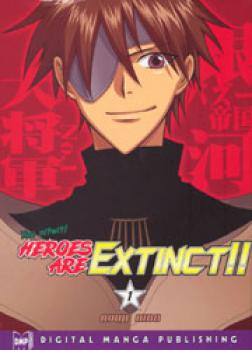 Other items in Heroes are extinct! manga US

Heroes [hee-rows] noun, plural, earth variation:
species of teenage Earthlings that come in groups of five, transform into "rangers" with color-coordinated outfits, and strike intimidating poses to ward off evil! General Cassiel has come from light years away with the intention of conquering Earth, and more importantlly, meeting Earth's warriors in battle for a showdown of epic anime proportions! But what will he do when he discovers that no heroes have come out to meet him in battle? Will he claim an easy victory; or, do Earth's heroes just need a little help getting out the door?

Sent by the Bazue Empire to conquer Earth, the Grand General Cassiel should know what it means to be a hero. Or does he? A dreamer through and through, Cassiel insists that heroes must look cool, be able to cut skyscrapers in half, and defend values like honor and justice - a rather idealistic view, to say the least. Heroes are extinct! is at once a humorous parody full of heart and a personal drama about the nature of dreams and reality. Aftr all, is it really about the capes, explosions, and fancy costumes...or the person underneath the mask?