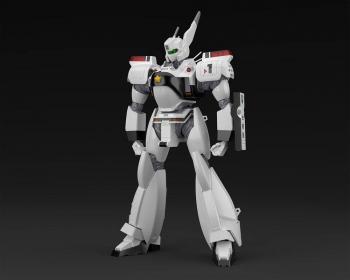 The proportions and design of the various parts have been brushed up as the latest version of Ingram under the supervision of the designer, Yutaka Izubuchi.

The sealing covers that characterize the Patlabor are made of plastic parts with a realistic design, and combined with the built-in joints, you can enjoy recreating various scenes from the play. The leg hatches and cockpit hatch can be deployed without replacement, and the cockpit seat can be raised and lowered to allow the pilot, Noa Izumi, to be positioned in a seated position.

In addition to the revolver canon and stun stick, five different wrist parts are included. The figure also comes in 1/43 scale, which is the international standard for miniature cars, and can be easily combined with existing miniature cars.

- Snap kit of color-coded molding, no adhesive required
- Markings in various parts of the fuselage are reproduced in water transfer decals.
- Stan stick comes with one each in a telescopic state
- Comes with one revolver cannon is a representative equipment of Ingram.
- The sealing part of the joint is made of plastic, allowing a high degree of freedom in posing.
- The cockpit can be opened and closed, and the same scale figure of Noa Izumi in the boarding position is included.
- The hatch in the calf can be opened and closed to store the revolver cannon inside.
- The head shutter and retractable patrol light can be replaced to reproduce the opening and closing.