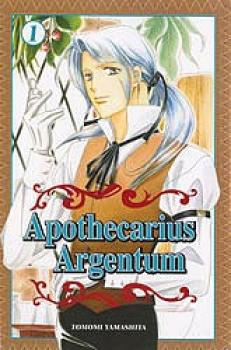 Other items in Apothecarius Argentum manga US

Argentum was raised to be a poison tester for a royal family. As he grew up, he developed an unusual immunity towards toxic substances and later became a master chemist with the ability to cure any illness. Returning to the kingdom after a long absence, he is assigned to be Princess Prima's bodyguard. But any relationship that might develop between the two will have its limits; Argentum's very touch has itself become poisonous.

I think its a very well story:

A young slave named Argent was taken in by a king to protect his daughter. The princess Primula was constantly exposed to assasination threats.As they grew up, the princess realized dangers associated with Argent's job of tasting her food,so she released him.But he'd already developed an unusual immunity forwards toic substances,and in freedom he became a master chemist with the ability to cure any illness.

One fatefull day,the princess takes ill while her court healer is away on an errand. An apothecary who has just recently set up shop in the kingdom is summoned to her side.The princess is starting to find out that this is Argent,now grown up.After healing her,she decides that she wants him back in the court as the royal apothecary. But argent is more interested in helping those who really needs his skills,not a princess who he percieves as vain and indulgent. But he may not have any choice in the matter.

"princces Primula has an important job but she gets distracted by the handsome apothecary Argent" by ShadowCath (België) on Jun 22, 2008

the beginning is a bit slow, but when you're thrue the first chapter you want to know more.

Some expressions are really funny -espcially Argent's- the story is well written and full of dillemma's what a princess got to do: choose between her own luck or that for her people.