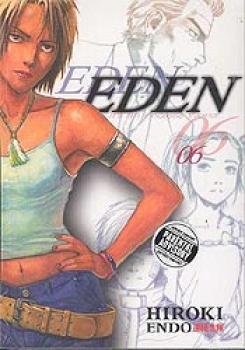 Other items in Eden manga US

As the survivors of last volume's bloodbath regroup, a pivotal character lies in a coma, and young Elijah is separated from Colonel Kahn's freedom fighters and swept into another complicated whirlwind of trouble. He's caught between two violent groups, beaten and harassed by revenge-hungry policemen, and hounded by a sadistic drug lord who may have ties to Elijah's father. In Hiroki Endo's post-pandemic world, humanity is quickly rebuilding its cities and returning to the comforts and conveniences of large urban environments-but reviving destructive, age-old habits as well. While exploring the crippling vices that have plagued humanity throughout history, Endo also serves up a volume of bittersweet reunions, shifting alliances, and surprising new settings.