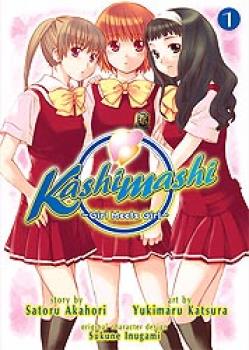 Other items in Kashimashi (Girl Meets Girl) manga US

Being a girl is harder than it looks...
For Hazumu, this couldn't be truer, because just the other day, she...was a he.

Shunned by the girl of his dreams, Hazumu loses himself in the mountains and is promptly squashed by an oncoming space ship. The alien inside, feeling guilty, rebuilds Hazumu's body...but as the wrong gender!

Now Hazumu must learn how to be the girl his parents always wanted while dealing with the trials and tribulations of being caught in a love triangle between two girls--his childhood friend, Tomari, and Yasuna, the girl who rejected him but is now strangely attracted to him/her! 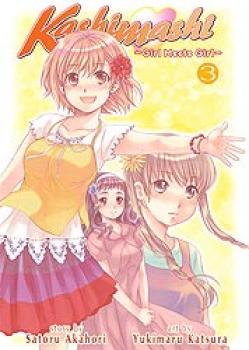 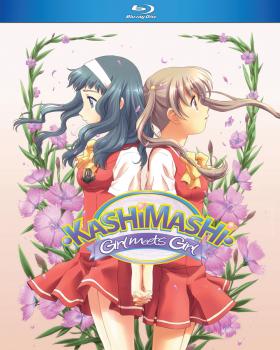 Hazumu was a boy. An alien accident made him a girl. How is (s)he going to handle is love life now?

This story has a lot of comedy (both the alien sensei and Namiko-sensei are crazy). But although there are aliens and crazy moments, the romance part is quite serious and beautiful, even if you are not into the yuri genre (girls love).

If you have watched the Kashimashi anime you already know what the basic plot is. However, rest assured that the later half of the story starts to get a lot different than the anime. Although the anime version is more hilarious (the jokes work better when animated), the beautiful drawings and the change of plot made this manga worth the money and time.

Seven Seas has done a pretty good job with the English adaptation. There are only a few moments where the dialog is 'less accurate' or sounds odd throughout all the 5 volumes. But overall, the translation is very well done. They kept the cultural references, and names formates and honorifics (like the -chan, -kun, -sensei). They also included translation notes. The manga is read Japanese style (right to left) which is great! It is only a pity that they did not kept the first page in color on volumes 2-5, like they did in volume 1.

I hate what Viz Media (and others) do to mangas, like mirroring, names like Mr. instead of -san, and even some times censoring the author's work. Bleh! But Seven Seas has done a great job.

This manga is Seinen, and so it's for an older audience, and not recommended for kids (less than 15).

In short, this is one of my favorite mangas. A must buy.

Once i found out about this series i was hesitant. I wasn't sure if i'd like it since it might be a bit lame considering the "boy gets changed into a girl" storyline. But i was wrong!
It's really a funny series with a cute drawing style. And of course there's no love story without a bit of drama!
People that like lovestories that make you smile will definitly not be disappointed!
So try this one out.

This is a fun and endearing gender-bending romance, I really enjoyed reading it.
Hazumu who's been irrevocably turned into a girl due to an alien mistake, is suddenly caught up in a love triangle between two girls! But girls can't have other girls as lovers...or can they?

This is no cheap ecchi story about how cool it would be for a guy to have a girl's body for a change, but a feminine boy who gets turned into a girl, and surprisingly has less trouble to adapt than his/her environment.
This is a rather light-hearted romance story with a touch of drama, so I recommend this to everyone who loves well-written love stories.