FROM THE DIRECTOR OF NINJA SCROLL AND MADHOUSE STUDIO (DEATH NOTE, ONE PUNCH MAN)

Wicked City: It's not unusual for lady-killer Renzaburo Taki to share a night with a woman. When that woman can turn into a demonic spider, however, it's just a little worrying. The demons are on the move, and as a member of the Black Guard, Taki's job, his "real" job, is to protect the human world from the demon world. And his work is just beginning! A fragile peace exists between the two worlds, brokered by a treaty. In order for the renewal of that treaty to go smoothly, Taki has to protect Giuseppi Mayart, a two hundred year old man with immense spiritual power, from an extremist faction of demons seeking to bring chaos to the two worlds.

Worst of all, Taki's assigned a partner for the mission: the unnaturally beautiful Makie, a fellow Black Guard member... and herself a demon! The two will have to go all out to protect the old man, as not only are the demons going to extreme lengths to kill him, but Mayart seems oddly unconcerned for his own safety. Is there more going on than Taki and Makie relalize?

Demon City Shinjuku: The near future. The glittering skyline of Tokyo now lies broken and crumbling under the weight of an oppressive evil: the tyrannical Rebi Rah. Rah has transformed Shinjuku, the heart of Tokyo, into a city of demons... and that's just the beginning. There are only three days left until Rah destroys the world.

For years, no one has dared to cross the foul moat which Rah and his evil minions built around the Demon City - until now. Desperate to rescue her father, who was taken captive by Rah and his monstrous minions, the beautiful Sayaka Rama enlists the help of Kyoya, a streetwise Tokyo teenager. The two must bravely venture into the Demon City, where even the army fears to tread.

Even if Sayaka and Kyoya manage to defeat Rah's army of monsters, will they be able to destroy the dark sorcerer? Or will they face the same fate as all those who came before them? 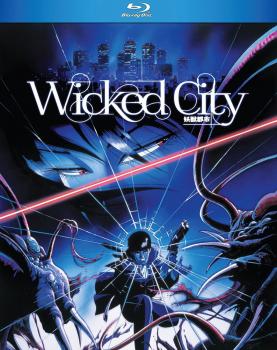