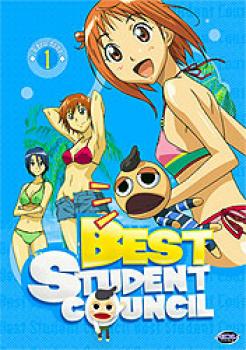 Other items in Best student council TV DVD US

Rino loses everything and has no one to turn to after her mother's death. With the help of a mysterious pen pal, whom she has never met, Rino transfers to the very selective Miyagami Private Academy. She arrives at the steps of this prestigious institution along with her hand-puppet Pucchan, who seems to have a mind of his own. At this academy, she meets a gifted group of individuals who are willing to serve and protect the school and its students at all cost! They will help Rino discover something special about herself. This elite body of students are the members of the "maximum authority-wielding" Best Student Council.

An optimistic view on Best Student Council might describe it as "a fun blending of parody and pure comedy, with just a tinge of more serious content."
A more cynical view would describe it as "relentlessly stupid and cliché-ridden."

While it is consistently stupid in its recycling of bad clichés from two decades' worth of high school comedies, it does have its clever moments and rarely tries to be anything other than what it is: a preposterously silly take on school life at an all-girls academy.