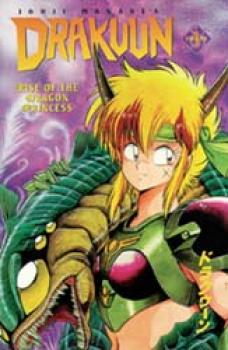 Other items in Drakuun manga US

In the year 4077, life is anything but tranquil. Ledomiam, the last of the free nations, has reluctantly agreed to make peace with the tyrannical Romunilian Empire. Karula Olzen, feisty second daughter of the Ledomiam royal family, has been send to the Romunilian capital to sign a so-called Treaty of Amity, a document which should reduce her country to little more than a vassal state. But, once on the other side of enemy lines, peace is the last thing on Karula&#39;s mind. Launching a vicious attack on Emperor Gustav, she kick starts a war that puts her family in danger and makes her a fugitive of justice. With the aid of a traveling circus and an oversexed border guard named Dard, karula manages to stay one step ahead of her pursuers on the trail toward freedom. Drakuun is another saucy science-fiction adventure from Johji Manabe, creator of the popular Outlanders and Caravan Kidd series.