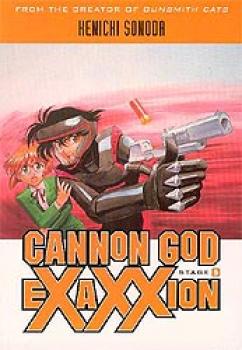 Other items in Cannon God Exaxxion manga US

Life has started to look up for Hoichi Kano. Sure, he's Earth's only hope of resisting an insidious alien colonization-slash-invasion. Sure, he's had to deal with the fact that every time he uses his super-powered gunsuit or the mighty robot Exaxxion to fight the aliens he puts the lives of everyone he loves in danger. But every high school student has issues, right? Now, Hoichi is kicking butt and taking names, and it looks like he has the Riofaldians on the run. He's got the girl, the guns, and his father-a depraved, eccentric genius who commands a war room full of voluptuous androids-on his side. What more could a hero need? But in the shadow of a tenuous cease-fire a battle still rages, with both sides desperate to win the support of the masses-both Human and Riofaldian alike! With so much propagandized mud being slung, will anyone know who the true enemies are at the end of the day? And will anyone notice just how close the Riofaldians are to breaking through the Kano family's defenses?