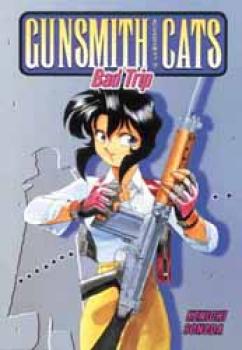 Other items in Gunsmith cats manga US 1st ed

Rally Vincent&#39;s frantic hunt for an antidote to the poison in her veins has led her straight to ultrawoman assassin Goldie. Drugged to the gills, Rally discovers that Goldie&#39;s lair is chock-full other young women who&#39;ve been drugged and brainwashed for Goldie&#39;s personal use as slaves and hit-women. And to make matters worse, Goldie&#39;s intentions are to program Rally to kill her old friend, Chicago detective Roy Coleman! Bad Trip continues the white-knuckle events begun in Goldie vs. Misty, so gas up your muscle car, put on your body armor, and bring plenty of ammo!