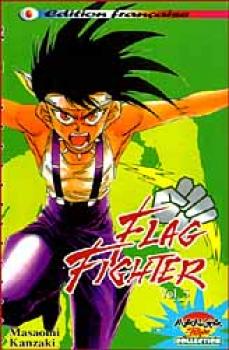 Not that I really cared how Flag Fighter was going to end, mind you. Within a few chapters of its first volume, Flag Fighter squandered what little potential there was in its initial premise (brutal illegal street fights between all sorts of bizarre contestants) and began to fall apart. It's been a dull, predictable ride riddled with hollow characters and insultingly stupid clichés. Plot twists of the most done-to-death nature are abruptly pulled out of nowhere in every volume, none of it serving any purpose except to annoy the reader. The fights, which ought to be any martial arts manga's saving grace, were just as predictable as everything else and thus completely devoid of tension. The page layout is also exceptionally poor during fight scenes, which leads to a confusing mess of pages where the reader can just about distinguish people hitting each other very hard but without any real chain of cause and effect to all the limb-flailing and attack-name-shouting that goes on. In other words, my expectations were at an all-time low for the final volume of this complete train wreck. And yet the finale still managed to sink below even the positively sub-human levels of the rest of Flag Fighter. The story doesn't so much conclude, rather iIt just stops at a random point. Plot threads and characters that have recently been introduced are left dangling, and the entire build-up to a supposed big tournament is rendered moot, since we never get to see any of it. The manga ends well before the story does, adding one more insanely stupid decision to the very poor plotting. It's as if the author suddenly ran out of ink and just decided not to bother anymore. Or maybe an editor somewhere realised how morbidly awful this series really was and pulled the plug on it. Whatever the cause, ending this embarrasment the quick and dirty way (a mercy killing, if you will) was a wise decision. In fact, the only positive thing about this series is that there's no more than a mere five sloppy volumes of it out there. Flag Fighter is utterly abominable dreck, so desperately clichéd and stupidly plotted that it would insult the intelligence of an amoeba. More volumes of this rubbish would be about as welcome as the resurrection of Joseph Stalin.