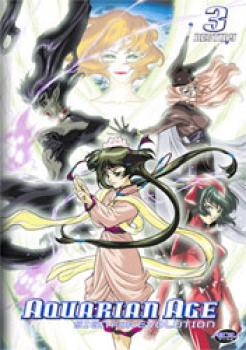 Other items in Aquarian age Sign for evolution TV DVD US

It seems everyone is out to convert Kyouta, or to kill him. As Yoriko tests the seemingly limitless boundaries of her powers, Kyouta slips into an ever-deeper morass of depression. Losing his musical muse seems to have destroyed him in ways a mystical archer just can't duplicate.

But after the latest attempt on his life, he finally gets the answers to his questions and learns the secrets of the ancient mystical war for domination. Determined to save Yoriko, he confronts her worst nightmares in a climatic battle where Darklore, Arayashiki, E.G.o. and Mindbreakers fight as one against Sarasvati and Benzaiten in an attempt to save a love and a world!