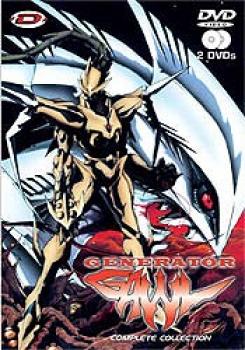 Generator Gawl is a very meat and potatoes anime. Its early episodes almost feel like an anime clichés 101. And if there's one thing the anime market has in spades, it's clichés. Generator Gawl has them all, and doesn't attempt to hide any of it. There's the high school setting complete with wannabe comical bickering between potential love interests, there are the stark, stylised character designs with improbable hairstyles, your requisite monster-of-the-week battles with gnarly transformations and lots of collateral damage, and a generous dollop of blatant stealing from Evangelion to top it all off.

If you've been watching anime for a few years, it will all feel very déja vu. And yet, Generator Gawl has a certain something that makes it, if not stellar, at least really quite watchable in spite of the extremely tried-and-true parts that make up its whole. Perhaps it's the small cast and the low episode count. We're given a fairly good look into what makes the main characters tick, and the plot moves along with a decent pace. Twelve episodes leaves little room for subplots or filler arcs, meaning we get a fairly taut narrative. They even sneak in some unexpected plot twists and interesting concepts.

For all the little things the series does right, I do have to fault it for one major plot hole involving the whole time travel set-up. Without giving too much away, the series revolves around three boys who've traveled back in time from the future to prevent an upcoming cataclysm. About two thirds into the series, we're treated to the full story behind their time traveling. And when you stop to think about it, the logic driving the actions of the villains they're trying to stop completely falls apart.

You'll have to try pretty hard to overlook this major flaw in the plot, but if you can bring yourself to that, Generator Gawl isn't a bad little series. The art and animation, like the story, are fairly good if nothing groundbreaking. While a lot of anime series can completely turn the viewer off because they endlessly regurgitate the same old clichés, Generator Gawl manages to serve up a pretty interesting story in spite of its strict adherence to the book of anime clichés. It makes for a pretty good rental or a nice bargain bin find, but I wouldn't recommend going out of your way for this series. Take it or leave it, you won't end up far worse off either way.