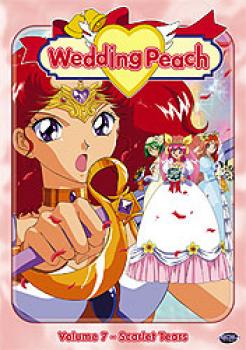 Other items in Wedding peach TV DVD US

If two's company, and three's a crowd...
Then what in the world do you do with a fourth Love Angel who's mad as hell and out for blood?

Fasten your seatbelts and hold on tight 'cause there's a new Love Angel in town, and she's seeing red. Scarlet, that is, and she's ready to kick some serious devil butt! Let's just hope the other Love Angels can teach her a little tenderness before it's too late. And speaking of tenderness, what in the world is going on between Angel Lily and Limone? Could it be love??? The battlefield is definitely heating up as Potamos unleashes her jealous wrath on the Hanazano campus, flipping the entire school upside down! Did we mention the part about your seatbelts? Contains six complete episodes.

It sure sounds like there's a lot of action going on in this seventh volume of Wedding Peach. A fourth Love Angel shows up, the Saint Something Four are finally gathered (I still can't get over what must be the most stupidly named magical gizmos ever), Potamos is sent packing and a new villain takes her place. Yet curiously, it all falls kind of flat. These are supposed to be big, exciting plot twists, but it's all handled rather half-heartedly, as if even the writers felt they were just churning about Magical Girls 101 by now.
Case in point: the new Love Angel, Angel Salvia is at first bitter and angry and not at all inclined to co-operate with Peach's group. Now, the lone wolf-ish character has been done before (it's all very Sailor Neptune and Uranus in this case, another example of blatant stealing from Sailor Moon's bag of tricks) but it could've made for an interesting dynamic. However, after a quick little melodramatic flashback in one episode, the whole conflict with Salvia blows over and everyone's all happy fun time again.
Similiarly, changing the main villain once again really doesn't leave that big an impression any more. It's a staple of anime shows, and a trick Wedding Peach has used three or four times already. It doesn't help that Petora, the new bad guy, is an annoying goof. I thought Potamos was irritating with her infantile mannerisms, but this guy goes around making daft Bruce Lee noises which is even sillier. Comical villains isn't exactly Wedding Peach strongest suit.
So basically, it's more of the same from a series that was already extremely derivative to begin with. These episodes boast some pretty nice, colourful and vibrant art that stands a notch above typical TV fare of that time, but there's very little else in here to make the series stand out from the crowd. Only teenage girls with an extreme romantic streak and an addiction to pink hearts and ribbons need apply.