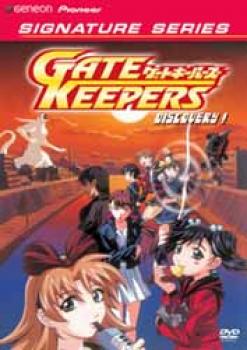 Other items in Gatekeepers TV DVD US Signature edition

Megumi's insults force Reiko to face her own incompetence, so Reiko attempts to improve by emulating each of the other Gate Keepers' training methods. Even though her efforts continously fail, Reiko eventually discovers her own way to contribute to AEGIS just in time to meet new challenges from the Invaders! Then, the Far East Branch of AEGIS uncovers evidence that the Invaders have begun to replace real people with their agents, but HQ refuses to devote more resources to help. With the discovery of a canine Invader, will HQ be forced to regret their decision?<UL><LI>Episode 16 - Send out the gate robo!<LI>Episode 17 - Race down the trailless road!<LI>Episode 18 - Protect the invader?</UL>