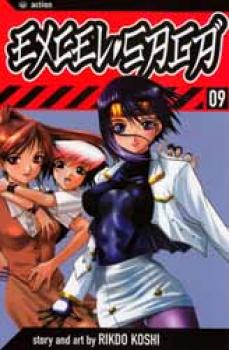 Other items in Excel saga manga US

Fukuoka 911! Perhaps the stress of the hobo lifestyle has led Excel Saga's characters to crack and imagine themselves cast in a badly-edited retrospective on Japanese cop shows. Even translator went insane-er on this, the kickoff story to Volume 9! But back in The Real World (no, not the MTV version, but the one with the poverty, squalor, and filth), life brings surprising new fortune to Hyatt, Excel, and Elgala, as they are mysteriously led to new digs equipped with, dig it, cable! But the girls' short-lived attempt to jump right back out of unblissful reality through that mercy-packed syringe known as the remote control is squashed by remembering the mission... the "Conquer-the-city-of-Fukuoka" mission... as strange new avenues of commonalities are discovered between Il Palazzo and Dr. Kabapu. For once, Excel Saga is going to have a story like a real manga (that is, one like a "not very original anime"), as both sides end the shadow war, and finally fight it out in the streets with lots of guns, lots of shooting, and lots of robots! Will the cynical masses respond to this awesome demonstration of power, or will they just assume it's just guerilla marketing for the next Power Rangers sequel? 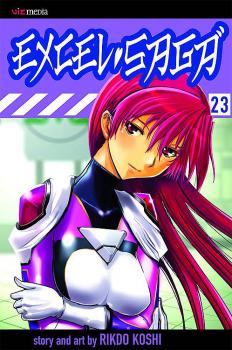