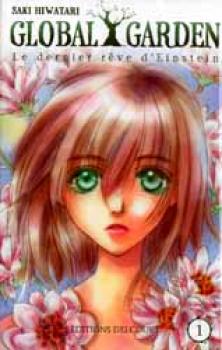 Global Garden is the most recent work of Saki Hiwatari (it's still ongoing in Japan), who had her national and international breakthrough with Please Save My Earth. Global Garden is in a way similiar to PSME: Here, too, we have two places of action (see article information above), one being in the past and one that is meant to be in near future. It's the past that influences the main charcter's actions in the &amp;quot;present&amp;quot; of that story, and just like in PSME, they cannot escape their responsabilities that result from this past, like Ruika tries to do it when she wanted to make Hikaru believe that she wasn't Ruika but Masato, her little brother, who died in an air crash. Not only it's an exciting and touching story, the drawings are also of an extraordinary beauty, in fact just like in all of Saki Hiwatari's more recent works. Writing about how she got the idea for this story she draws interesting comparisons between Einstein and physics on one side and manga on the other side. Though (as a German *g*) I have to say that it's a bit unfair when Einstein is still labelled as father of the atomic bomb. He and his famous formula had much less influence or responsability for the construction (not to mention the dropping) of the atomic bomb than it may seem. But it's that responsabilty from the past that connects Einstein (and his sort of reincarnation Robin) with the other characters in this story.
No complaints about Delcourt's french adaption including dust jackets and keys to comprehension for a good price.