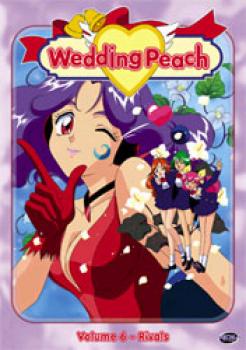 Other items in Wedding peach TV DVD US

The Love Angels are playing cupid! Wedding Peach and the mighty Love Angels continue their mission of love in this brand-new volume! But the battling brides will have their bouquets full with the likes of Lady Raindevila and Pluie, the fire devil Igneous and his vicious devil-wolf, the water devil Potamos and worst of all, a gorgeous new transfer student who may ruin Momoko's chances of winning Yosuke's heart!

Wedding Peach is sometimes labeled as a bit of a Sailor Moon clone. Which is completely false. It is, in fact, an utterly shameless, absolute Sailor Moon clone. It's not just the familiar art style and the near-verbatim copying of Sailor Moon's monster-of-the-week formula. Examine the series more closely, and you find that every plot element has been lifted, in some form, from Sailor Moon's adventures. A mysterious, dashing man who swoops in to save the heroine at the last minute? Revelations about a tragic conflict in a past life? Awkward budding romance veiled by mock hostility? It's all there. If you're at all familiar with other magical girl series, don't expect to be surprised by Wedding Peach. The series doesn't bring anything new to the table, except maybe for above-average animation and a louder-than-average colour palette.

Things do begin to pick up a bit from this disc onward. There aren't any plot twists you haven't seen before in these episodes - there are just more of them spread over a smaller number of episodes. Villains who exit tragically, stabbed in the back by their cohorts? Been done before, at least once in every season of Sailor Moon. Instantly popular transfer students who harbor secret agendas? Been done before in every anime ever aired.

So it's hardly groundbreaking stuff, but every break from a stretch of filler episodes is welcome. The transformations and battles did get awfully tedious, though. Whenever the monster of the week reveals itself, the exact same stock footage is repeated. And usually, that's it. The 'battles' are often nothing more than stock footage of the girls twirling their funky batons around. It's not so bad if it's aired at a rate of one episode per week on TV, but when you've got multiple episodes strung together on one DVD, you'll reach for the fast-forward button after having seen it once or twice.

If you simply cannot get enough of cutesy magical girl anime trappings, you should be able to enjoy Wedding Peach. The whole series is one big collection of standard magical girl trappings, with extra colourful character designs and extra-elaborate baton-twirling sequences. I expect there's some die-hard crowd of magical girl fanatics out there who'll embrace this, but it's a bit much for everyone else.