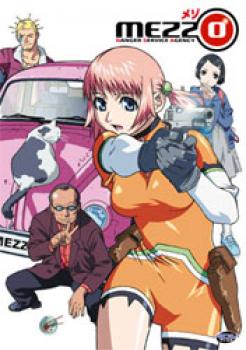 Her name is Mikura and she's all about service with a smile.

So what if that service is cracking skulls and the smile happens to be on the other end of a loaded gun? With a killer body, vicious skills and an atitude to match, Mikura, who's part of the Danger Service Agency (DSA), gets away with murder (literally). It's a good thing, too - because in the world of Mezzo, staying alive is never easy! 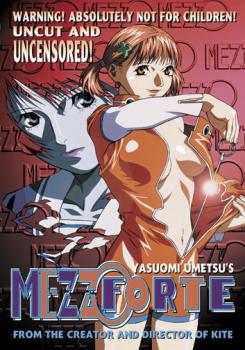 This first volume of the series which follow up the original Mezzo Forte comes with a box, where you can put in all 3 dvd's! It's not as sturdy as the boxes that came with FMP!, Chrono Crusade or NGE, but it looks cute ;).

This fan-service packed volume contains LOADS of action! By FAR the best episode on this volume (and as I heard and read in rumors the best of the whole series) is the first episode! I've watched it over and over again! The action sequences in this episode look absolutly GREAT! Mikura is looking killer while she fights!

The other 4 episodes are not as action packed as the first, but still good. These episodes also deal with not-out-of-this-world characters and some kind of dangerous virus! The last 2 episodes are quite unusual. While looking at episode 4, which begins with Mikura going away on a date and then only to be seen at the end of the episode, I thought "HUH, WHAT?! No Mikura in the whole episode?!". But in episode 5 we see with who Mikura was on a date and how she ended up at the scene at the end of episode 4. Okay, I have to admit, there were some "flaws" in episode 4 and 5 (the one I still remember is the size of the coin.....), but it is a cool idea!

And, for those who've seen Mezzo Forte: take a look at the flash backs and see what it reveals about Mikura ;)!