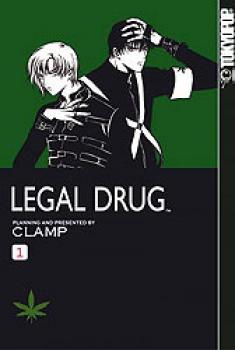 A drugstore that deals in medicine ... and danger!

Kazahaya Kudo has a gift. When he touches a person or an object, he sees visions. With no money and no place to stay, Kazahaya was out of luck until fate brought him to the Green Drug pharmacy. Now, in exchange for working in the store, he gets room and board. But in order to make ends meet there's a catch ... he must take on 'special' assignments from his boss that can only be handled by someone with Kazahaya's gift.

With the help of his co-worker and roommate Rikuo, who has unusual powers of his own, Kazahaya finds himself on missions most surreal.

I was little bit disappointed this CLAMP -work, especially when it comes to plot and characters. Drawing style is as beautiful as ever though.

Legal Drug looked like a very promising manga. I was expecting a tight supernatural thriller with homo-erotic undertones, which CLAMP usually does so well. And that cover design sure is edgy. Turns out Legal Drug is all sizzle and no steak so far, though. Definitely not a Tokyo Babylon for a new generation or anything like that. There are moments when this first volume shines, but they're rare. So far, Legal Drug is badly crippled because it lacks interesting characters. For our two leads, we have a blond girly-man who reacts to every single situation by queening out hysterically and a tall, dark-haired top man who's constantly stoic and brooding. Probably on account of a secret, tragic past. Yep, it's Clichésville, Yaoi all the way. They work in a drugstore and are occasionally sent out to do odd jobs with a tinge of the supernatural to them, seeing as they're both gifted with a form of ESP. This leads to one truly gripping story early on where the boys have to retrieve a haunted book. The rest of the volume, however, is tepid at best. Hints at past tragedies for the two leads don't do a lot to interest me. Squeaky blond androgynes and dark, manly sullen types, each lugging past tragedies around has been done countless times before, and Legal Drug doesn't offer any significant twist on the formula so far. I don't see what the whole pharmacy motif adds to the story either. In a tale that badly wants to be character-driven, characters you don't care about are a fatal blow to the story. The art is serviceable but unremarkable. It is, in fact, too stylised and deprived of detail to really impress. With all that, Legal Drug merely registers a slight blip on the interest-o-meter. Not nearly enough to warrant buying further volumes to see how all those past tragedies play out. I've most likely seen it all before anyway.