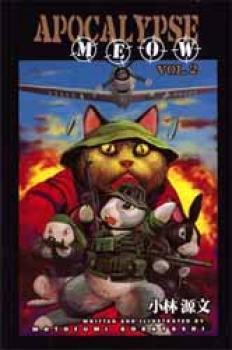 Other items in Apocalypse meow manga US

The saga continues as Sgt. "Perky" Perkins, Rats, and Bota continue their perilous recon mission in the bloody jungles of Vietnam. Perky contemplates the moral quandary of the war as he witnesses French, Chinese, and Japanese military intervention alongside the suffering of Vietnamese civilians. When a clash with an MP orders Rats home, he observes America's opinion of the conflict. Meanwhile, the war rages, and the Viet Cong subject Perky and Bota to the harrowing status of POW. Rats returns to the quagmire and joins in the rescue effort with some Vietnamese allies who aren't going to let their captured buddies go down without a fight! Also, as a bonus, this volume presents a special feature where readers can learn more about the SOG and the Australian SAS. Come be a part of this unique anthropomorphic adventure as the rabbits of the U.S. military battle for supremacy - and survival - over their feline North Vietnamese counterparts!