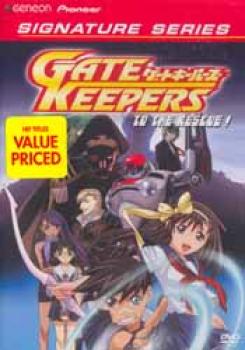 Other items in Gatekeepers TV DVD US Signature edition

The Aegis HQ in New York sends experienced agents to take over the defense of Japan! Immediately, Shun and the other Far East Branch agents protest, but after a near disaster in the field, they are focred to recognize their inexperience. However, are these new orders playing right into the invaders' schemes? When self-doubt and internal conflicts become more of a threat than the Invaders' plans, it's time for action both on the field and in love!<UL><LI>Episode 13 - Defeat the invader executives! Part 1<LI>Episode 14 - Defeat the invader executives! Part 2<LI>Episode 15 - Stop the arranged marriage!</UL>