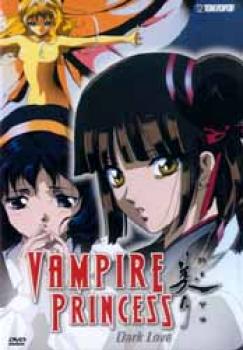 Evil Shinma roam the Earth on a mission to unleash their darkness upon the Human race. Miyu was born the Vampire Princess and charged with the responsibility of banishing Shinma from the Earth. Stranded in the twilight between human and demon, She has the power to offer Humans the gift of eternal happiness with one bite, yet is herself, destined for perpetual solitude. Sharing a dark journey through the weaknesses of the human heart with her only companion, Larva, once an evil Shinma and now her devoted guardian, Miyu lives an endless quest as both the hunter and the hunted. Contains episodes 17-21. Approximate running time: 125 minutes.

If you enjoyed the 1988 Vampire Princess Miyu OAV series, you had better lower your expectations before watching the TV series. Not that it's a bad little series, it just doesn't have anywhere near the style (or the budget) of its OAV predecessor.

The TV series' most serious flaw is that it often re-hashes a predictable Shinma-of-the-week formula. A large chunk of the series' 26-episode run is eaten up by episodes where we see very little of Miyu and instead focus on a victim-of-the-week character and the issues he or she faces. Since there has to be a goofy Shinma battle every week, you can usually see the dénouement coming for miles; someone or something will turn into a hokey-looking monster and reveal its machinations near the end of the episode, only to have Miyu show up and succinctly blast it to pieces with her fireballs. Couple that with art and animation that's usually nothing to write home about, and you have a series that sadly missed its shot at greatness.

That said, the episodes on this disc are a bit better than your average chunk of Miyu filler episodes. Episodes 17 and 18, in particular, offered an intersting twist on the usual formula. The writing served up a few of those chilling moments that the OAV series got so right, and the animation quality started to pick up significantly in this volume's last few episodes. I wouldn't call the TV series a masterpiece by any stretch, but in this batch of episodes, you can see some glimpses of the greatness that it could have achieved with just a little more flair and creativity. Which, oddly, makes for a DVD that is both enjoyable and frustrating to watch.