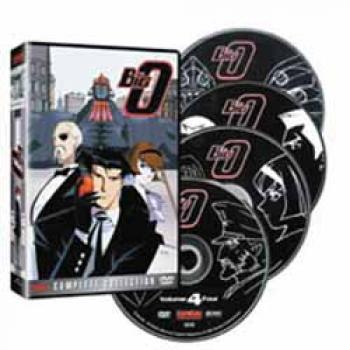 Other items in Big O TV DVD US Boxsets

Paradigm City. A City of Amnesia. Forty years ago, everyone lost their memory... but humanity continues to survive. Roger Smith is a Negotiator, hired to negotiate disputes between parties. With the power of a wondrous piece of technology known as the Big O, Roger Smith keeps Paradigm City from the nightmare of memories. Approximate running time: 325 minutes.

The Big O, named after the enormous robot piloted by central character Roger Smith, introduces us to a post-apocalyptic world of a very different kind, shown to us like an animated film noir.

Forty years ago, everyone in Paradigm City (and, you'll realise, the world) lost their memories, they lost everything they thought they knew. Society has rebuilt most of the basic systems, but with some memories apparently able to return with a jolt and unlock some of the powerful technologies of the past - and just about everyone wants to profit when such an opportunity arises.

Standing in the middle of all this is Roger Smith, ex-cop turned Negotiator who'll pretty much take any job he feels is worth his time, but you'll start to draw parallels to a certain Mr Bond, or probably more fittingly, Bruce Wayne of Batman fame.

The plot is enjoyable, if a touch simplistic on occasions, with a collection of suitably nasty villians each with very different objectives although there are occasional episodes which are relatively stand-alone affairs.

Visually, Big O is a matter of taste. If you like the very film noir style you'll love it - the look is crisp and clean throughout. If film noir isn't your cup of tea, it's not really a problem - there's enough in the character and background design to keep you happy.

Frankly the dub is better than the sub. That's not to say that the subtitles themselves are anything short of perfect, more that I'd always say that the American voices suit the characters much more than the Japanese, something about the very western look to the whole affair.

At current prices you get a lot of Big O for your money, though the extras are nothing special - a scattering of trailers and a textless opening sequence aren't going to encourage those who own the individual DVDs to trade up, but other than more Big O I can't think of anything worth throwing in.

All round, a very good package and a worthwhile addition to any collection.