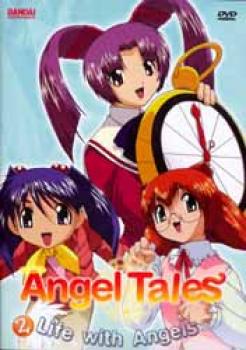 Other items in Angel tales TV DVD US

Just when he thought it was all just a dream, they return with more surprises! Once again, the guardian angels are ready to serve him with everything they've got. But living with 12 girls takes work. Now he has to work harder than ever to support them. Meanwhile, the girls are learning the facts of life. Find out how Akane and Midori transform themselves, and how "Tiny Trio" deals with boys their age!

If you bought this Dvd based on the reviews for Vol. 1, you'll be pleased.

Basically, the scene at the end of episode four was the result of the previous three overwhelming (albeit charming/cute/ect..) adventures. As a result despite the restrictions The Goddess placed on the bunch, their rambunctiousness and friction ends up not only being the cause of Goro's condition, but a fundamental failiure of their mission as Guardian Angels.

But their master doesn't give up. (Despite not realizing what happened entirely, apparently..) As his calls even reach the Spirit World, the Angels learn that they only have one chance to ever return to his side.

The end result is something I won't reveal, but basically, it's a really heart touching sequence of events that in the end, makes one wonder if the apartment lease Goro signed 'ever' had this many tenants in mind. =^^=;;

But as the back cover reveals, the next three episodes (5.5, 6 and then 7; making the second eppie on the disc a sorta 'Mihoshi Special' type where everyone interacts together for the first time.)

The next three basically are how the Angels begin to adjust to life on Earth, learning some deep stuff, such as they 'aren't' the only Angels, as well as normal life stuff.

But knowing that danger still lurks out there, Vol. 3 should be interesting watch. Those that enjoyed Vol. 1 won't be dissapointed.