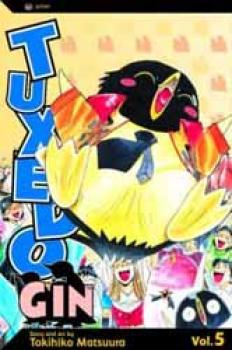 Other items in Tuxedo Gin manga US

Ginji Kusanagi "dies," but sometimes love can transcend death! In order to stay close to his precious Minako, his one true love, Ginji comes back to life reincarnated as Gin-chan the Adelie penguin.

Minako is finally reunited with Ginji! The only problem is that it's someone posing as Ginji trying to take advantage of Minako! What's a poor penguin to do? Can Gin-chan save Minako before it's too late?

Tuxedo Gin would've felt right at home among the silly romantic comedies that helped pave the way in the nineties for the current manga explosion on the American market. If you remember the time when Ranma 1/2 and Tenchi Muyo were the biggest thing on the then-fledgling American anime/manga scene, you've got a pretty good idea of Tuxedo Gin's bag of tricks. It feels funny reading what is essentially a throwback to those earlier days now that damn near everything under the sun gets translated and snapped up by eager American mitts. Later volumes of Tuxedo Gin feature a quote on the back cover praising the series as a good introduction to manga in general, and I couldn't agree more with that. Tuxedo Gin is just the right kind of title if cartoon sweatdrops and little details about Japanese daily life are new and fascinating things to you (or if you'll just blindly grab anything manga-ish just for the sake of being manga-ish). Older, more jaded viewers will find very little to surprise them in here, though. For example, this volume features a chapter set in a hot springs resort. Of course there has to be a hot springs chapter somewhere along the line in every manga, and of course a group of straight men will endeavor to peek into the women's bath with predictably oh-so wacky results. One particular shortcoming of Tuxedo Gin's is that the series over-uses one particular plot device. It seems like every second story involves some letch trying to force his attentions onto Minako (who remains mostly clueless) to which Ginji reacts with hysterical outrage and flailing attempts to preserve Minako's aura of virginal dignity, or whatever. It gets old pretty fast, especially if you've read a few manga before in your lifetime. Apart from that, the series is strictly middle-of-the-road stuff. Which doesn't make it a bad title per se, there's just hardly anything in there that'll make more seasoned manga readers sit up and take notice, even if they dig the whole penguin thing.