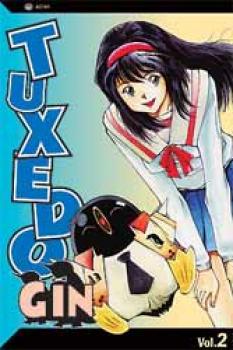 Other items in Tuxedo Gin manga US

Things were going great for Ginji Kusanagi - Not only did he just make his debut as a pro boxer, he also just met the girl of his dreams, Minako Sasebo. Unfortunately, Ginji has an accident and dies... and is then reincarnated into a pinguin! In this most silly of romantic comedies, will love be able to bloom between a boxing penguin and a beautiful girl!?

This book was a bergain bin purchase for me. I hadn't read volume 1 when I bought this and had in fact never heard of the title before. But golly, don't I love penguins. And this manga delivered exactly what I expected it would: a harmless bit of comical fluff, with penguins. The story revolves around a boy called Ginji who, somehow, has gotten himself trapped in an adelie penguin's body. Minako, his love interest, takes the penguin in, completely unaware that it houses a human soul. She also starts to search for Ginji, who is missing as far as she knows. Wacky hijinks inevitably develop with a penguin around who posesses human intelligence.

Most of Tuxedo Gin's humour is purely visual - it relies on the reader's willingness to find a cartoony penguin with a clip-on tie funny. And Ginji does look marvellously silly, especially when he's trying to look serious. Other than the loveable cartoon penguins that pepper this manga (there is a handful of penguins besides Ginji who sporadically appear throughout this book, and even a funky dream sequence loaded to the gill with penguins), these are basically a bunch of harmless, silly stories. The bulk of the book deals with Ginji and Minako lending a helping hand to a cute little boxing beginner who's gearing up for his first match. It's a pleasant read with some surprisingly solid plots. A lot of comical manga just present an outrageously silly premise and then just crank either the weirdness or sickening cutesy-ness sky high. Compared to that, Tuxedo Gin is pleasingly level-headed. There are sweet character-driven moments that work very well, even if you've just been introduced to the story. The art is basically your middle-of-the-road manga look. It's clean, competent and gets the job done perfectly well. It's certainly a lot more solid than the mere guilty pleasure for my inner penguin nut that I expected - I actually got quite fond of the characters by the end of this book, despite missing some chunks of backstory from volume 1.

There's really very little to complain about here. This book delivers some entertaining, not-too-stupid fluff at perfectly acceptable quality. I don't feel urged to rush out and obtain every volume of Tuxedo Gin under the sun, but I certainly wouldn't mind more stories about Ginji and his friends. Overall, this is a manga with its heart in the right place. It delivers good, clean fun plain and simple.