As a child, Monkey D. Luffy was inspired to become a pirate by listening to the tales of buccaneer "Red-Haired" Shanks. But his life changed when Luffy accidentally ate the fruit of the Gum-Gum Tree, and gained the power to stretch like rubber- at the cost of never being able to swim again! Years later, still vowing to become the king of the pirates, Luffy sets out on his adventure... one guy alone in a rowboat, in search of the legendary "One Piece," said to be the greatest treasure in the world... 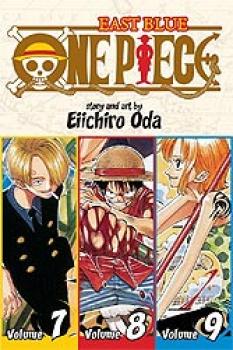 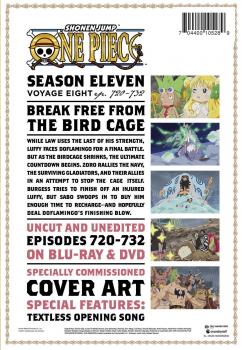 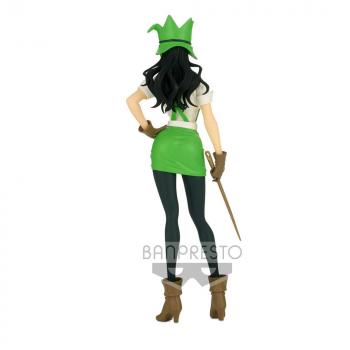 
I can not just describe this story. It is a crazy ride while following Monkey D. Luffy on his journey to become the Pirate king. NO. I have to relive the story.

Luffy is a straightforward, strange, goofy guy who reaches for the stars, or in his case a title and the ultimate form of freedom. On his adventures he meets various crazy characters and all these characters support the development of the main guy Luffy and the story in general.

It's the most selling story of all time and certainly with reason. It is an Obvious 5 star story and a MUST read or see.

One piece is certainly one of the manga that keeps the manga industry running. Oda eiichiro the creator of One piece has been working on this masterpiece for a good 12 years and it only gets better! The story's about a 17 year old kid named Luffy who want's to be the Pirate king and how he meet's allies, rivals and enemies on his journey. I recommend it to everyone: New people, Not-new people, youngsters, People a bit more mature this is one of the best manga and it can't not be in your collection, Buy this!

This is one of the most awesome manga's I have ver read!

I'm watching the anime, and it's up till now.. the greatest one I've ever seen, the manga is as good as the anime. I think the people who'd like a collection and watch the anime really should buy these OP manga's the are great!

OP is one of the most well-known and populair manga existing.
Most of the times it's ranked between 1 and 4.
The story is great , the characters as well and Oda thought very well of their names and such (he uses alot of inside jokes. Too bad that in the translated versions you won't get to read them so much)
OP is a long manga , still ongoing , still as great as ever and a must-read!

i have been reading this manga for a long time now, even online
but now i got the manga it's even better for a collection :)

this manga is awesome i say u must buy it now!

The story has such a basic principle; a pirate crew is looking for the greatest treasure in the world.
But a a couple (or actuelly a bunch) of strange characters with strange abillities and some humour, and you get one of the most funny and breathtaking series ever!!!!
This is one of those series that keeps on being funny. It is one of the only longer series that stick with their original plot and is still addicting.

A definate must read!!!!

This is really a populair manga, I can't blame people who like it, because it's awesome.
There's so much adventure and there are enough volumes so the fun keeps continuing,

I gotta tell you, a friend of mine convinced me to read it, else I wouldn't even have thought about ever touching it and my expectations weren't very high either...BUT I was very pleasantly surprised, it turned out to be SO much fun and the characters are all just so FUNNY XD
It's a silly story, silly characters and it was silly of me to think that it wasn't worth my time ;-)
I liked it and so will you :D

Volume 1 covers the romance dawn. This is the third and last version of the romance dawn. It explains the past of luffy and the connection with shanks. Chapter 2, alvida pirates. Chapter 3-6 is the morgan arc. And chapter 7 begins with the buggy arc. Cunning bastards to start an arc in the end, so you have to buy the next one XD.

The art is great even here in the beginning. The anime was completey different tho. Nice one ~

The best manga ever! Made by Eiichiro Oda, it's about a boy, Ruffy, who wants to be a pirate. As a young boy, he met Shanks, the red pirate boss, who's in his town for a year. When he left, he and Ruffy made a promise, Ruffy would become the Pirate King, and bring Shanks his hat back. A start for a young boy, ten years later, in a very small boat. Will he become the Pirate King?

"One of the greatest mangas around" by Richard Hendrikse (Netherlands) on Nov 15, 2005

The characters in this manga are all designed to be as whacky as possible and the story is VERY good.
the funnyness and diversity of the characters is very large and neverending. Luffy's "no-nonsense honesty" and idiocy truly make sure there's a neverending supply of funny and whacky situations. -- a must-get! ....................

The characters are really one of a kind in this manga. Their personalities are funny especially Luffy's (the maincharacter). The story is just great and the drawings are beautifull and well detailed. I'm sure everybody willl like it (oh, everybody likes it already)

One Piece is absolutely very good manga nad if you like pirates you should really buy it.
Personally I like that kind of comedy really much and I'm always been interested about pirates.

If you don't know One piece and you like pirates/comedy/a good shonen manga you have been living under a rock on Mars with your fingers in your ears!

Eiichiro Oda's masterpiece One Piece tells the tale of Monkey D. Luffy and his quest to become the pirate king.

But he has to start somewhere, so Luffy's first order of business is getting a good pirate crew.
The first potential crew member comes in the form of Zoro Roronoa, there is just one problem:
Zoro is a bounty hunter who captures pirates with a hefty bounty on their heads! Getting him to actually join 'captain' Luffy and become a pirate himself won't be easy at all...

One of the best manga ever with an engrossing story and comedy that will make you laugh your pants off.
Get this one, you won't regret it!

This manga, printed in the original top right to left bottom Japanese style is 216 pages long.