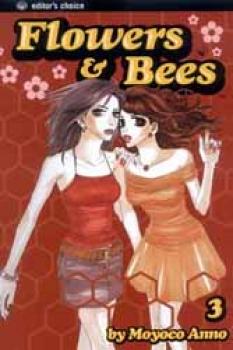 Other items in Flowers and bees manga US

Yamada's inexplicably attracted girlfriend Miwa gets stolen away - by World of Beautiful Men's bad-ass beauticians Kiyoko and Harumi, who demand to know exactly what a cutie like her sees in a badly-filled sack of delusions like him. The reasons will shock... no less than the reaction of Komatsu as he witnesses the staggering strength of Yamada's pimp hand at the happy reunion. Renewing his never particularly well-thought-out vow to best the pockmarked rival, Komatsu makes an equally ill-advised bid to trump Yamada by entering a nationwide idol contest - the dubiousness of the venture encouraged by the bottomless greed for fame, money, power, and money of Kiyoko and Harumi. The decision folds, spindles, and mutilates his already rather confused existence into confounding new shapes of shame, as the nice, carefree John Hughes high school sex comedy life Komatsu wanted gets taken over mid-shoot by John Frankenheimer and Cassavetes. At least he finally loses his virginity. To a woman and everything.