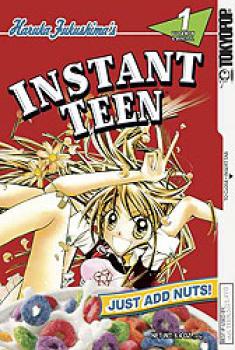 Other items in Instant teen Just add nuts manga US

Meet Natsumi Kawashima, a homely fifth grader with a craving for curves of her own. One day, after eating a packet of mysterious pink nuts, her wish comes true and she is transformed into a beautiful, sexy woman! Now endowed with a mind for recess and a body for supermodel glitz and glamour, will Natsumi's newfound adulthood and sudden fawning admirers lead to happiness or heartbreak?

I thought Kedamono Damono was kind of fun, so I decided to try reading some of Haruka Fukushima's other work. This story is the same in that the protagonist can "transform". Same nice art. That's where the simalarities end.
The protagonist is a young girl, who dreams of having the body of a model. As the summary says, she transforms into one by eating weird nuts. Eventhough she now faces the hardships and benefits of being a teenager, she still acts like a fifth grader. Sometimes, she's just plain brainless (especially when to comes to boys). It's hard for me to relate to her.
Overall, it's a cute, kind of childish story, with a bit of a lesson like "be careful what you wish for".

the art is great!! and the story is cute. but it's not that great. I didn't like it at firt, I had to read it again and again to like it more. i guess this manga is to childish for me... but hé that's me, but you may like it