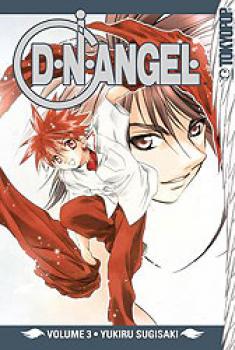 Other items in D. N. Angel manga US

It's time for the St. White festival, and Daisuke has been so busy working on the festival committee that he's forgotten to get a present for his beloved Risa. His mother, in her infinite generosity, forces Daisuke to take a simple white ribbon as a gift. To top it all off, there's a story going around that if a boy gives a white ribbon to a girl and ties it for her on St. White, they will fall in love ... 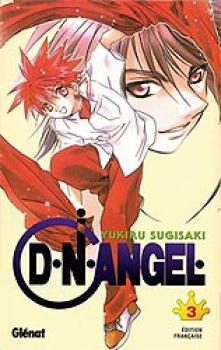 the third part of the serie. almost better as the other two. the best style of manga drawing I ever saw. great characters. and a part of the story is different and at least that great as the anime. and there are some extra's too.

When you read this volume you'll notice the bonds with the anime-storyline, but I think the manga-storyline is way more detailed and funnier!

Let's just take Keiji Saga: the hyper agent that kidnaps Daisuke for his role in an commercial about Dark. His role in the story isn't that important, that's probably why he didn't show up in the anime, but he is just so extremely funny! The scene where he *cough* changes Daisuke in a different costume, it gets immediately clear why people think there is a hint of shounen-ai in D.N Angel! ^^ I say no more, go read it!