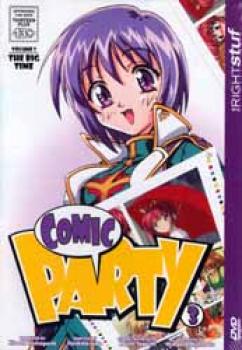 Other items in Comic party TV DVD US

Is destiny finally at hand? It's time for the biggest convention of the year: Comic Party! All of Kazuki's scrimping and saving, hard work and planning are about to be put to the test. Kazuki's never been this fired up before, and he's certain that he's drawn the perfect comic. All that's left is to sell it to the legions of otaku! It's the next big step toward world domination for The Two Brothers! But... why isn't Taishi celebrating? Meanwhile, Mizuki may not like Kazuki's new hobby, but she's still trying to be supportive. When her surprise appearance at Comic Party goes terribly wrong, Mizuki is determined to get his mind off of fan comics for awhile. With the warm summer weather, that means a trip to the beach! More than every, she wants to show him that there's more to life than just comics, but all Kazuki can think about is what happened at Comic Party. Will Kazuki ever return to normal? Join the Comic Party, and follow Kazuki as his journey takes him through the steps to becoming a master fan comic author - while spoofing everything along the way! From GUNDAM to EVANGELION, from INITIAL D to WEDDING PEACH; if it's part of the anime world, it's all fair game! 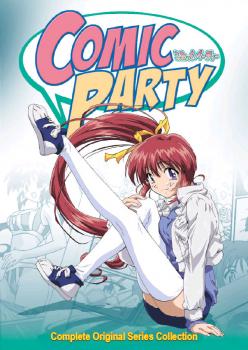