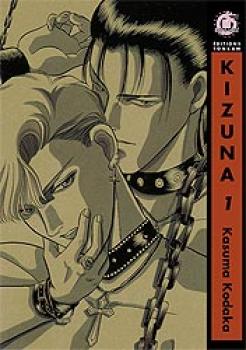 Other items in Kizuna manga FR 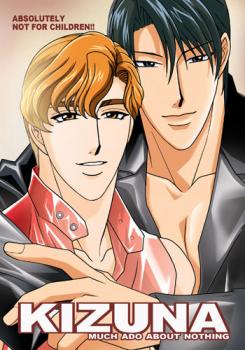 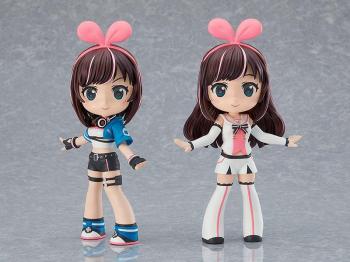 Reading the first volume of Kizuna has left me with mixed impressions. There are some promising elements in there, suggesting that the manga may turn out to be a worthwhile read in the long run. But in these early chapters, Kizuna clearly hasn't found its feet yet.

The art looks somewhat dated in this volume. Kodaka hadn't quite gotten the hang of human anatomy back in 1992, and it shows; proportions and perspectives are sometimes ineptly handled. These instances are thankfully not too frequent, but they're noticeable when they do happen. A more persistent flaw in this first volume is that the two leads just aren't very interesting. Fair-haired Ranmaru is basically a walking plot device. The plot declares that he's insanely hot, and that everyone goes ga-ga for him. Apart from that, he doesn't need to do anything at all. His lover Kei is even more of a weak link. I gather he's supposed to be the tough, charismatic top in this relationship. Alas, the whole seme vibe that he's trying to give off doesn't work, because he looks so awfully dorky. No matter how much vague yakuza stuff and full-page poses Kei does, he just fails to look cool because his whole character design looks completely wrong. Slicked-back hair, narrow eyes that evoke a cartoon python and crazy pointy eyebrows are not elements that make for an attractive man in my books.

Apart from that, the characters are rather bland. We know that Ranmaru used to be a kendo biggie, and had some kind of accident. We know Kei is the illegimitate son of a yakuza biggie, and he does some yakuza-ish stuff from time to time. All of this is presented as if it's a really big deal, but it never goes anywhere. But hey, I suppose mentioning yakuza and kendoka is always good for color, even if it doesn't really add anything to your story. Only Kai Sagano comes off as somewhat interesting. He may be another one-note character, but at least the reader is told what makes him tick. Ranmaru and Kei seem to be in a relationship just for the hell of it. Whatever chemistry drives the relationship is left almost completely unexplored so far.

That just leaves us with the sex scenes. There are a few of them throughout the book, they're somewhat lengthy and graphic, but when the characters having it off are neither very interesting or very attractive, it's hard to really care about what they do between the sheets. Frankly, if you just want to read some gay sex scenes, you're better off importing some hardcore PWP yaoi doujinshi. They'll most likely be better drawn, more explicit and less boring.

Less forgiving readers will probably be put off by this first volume. The old-looking art and the vapid, vague leads are big turn-offs for anyone but the most ardent yaoi fanatic. However, the art is likely to improve in subsequent volumes (apparently, Kei loses cuts his hair by volume 3 and looks less of a fat-faced dork from then on - that can only be a major improvement), and we may get some deeper insights into the characters. A few moments of drama in the first volume -mostly on behalf of Sagano- are fairly effective already. The author might just be onto something here, but it still needs to build up steam. All in all, I'm not overly impressed with this manga so far, but I'm still willing to give Kizuna a chance. If the leads don't start showing some more color soon, though, I'm afraid even the sight of male nipples every few pages won't be enough to keep my interest.