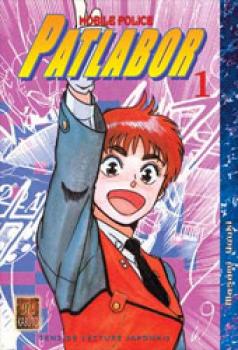 Patlabor's multiple animated incarnations, be it movies, OAVs or TV episodes, are a bit hard to keep track of. But the bits and pieces of animated Patlabor that I managed to get my hands on so far have all been of very high quality. With this translation from Kabuto, the manga is now easily available to francophonic readers, and looks every bit as solid as Patlabor's other incarnations judging by this first volume. There's that same sense of down-to-earth, intelligent science fiction storytelling. Perfectly utilitarian giant robots are commonplace in Patlabor's world. The story is basically a light-hearted, though remarkably plausible tale about the things criminals (meaning anything from petty thieves to industry spies) get up to using these giant robots as their tools - and the long-suffering little people on the police force who make a living by stopping said criminals with their own giant police robots. It sounds like a silly story, and it's certainly told with a healthy degree of levity, but everything is actually surprisingly well thought out. The characters grow on you with their distinct little quirks, the humour works like a charm, and there's always a solid, engaging story being told. For quality science fiction that remains refreshingly grounded in reality and highly entertaining throughout, look no further than Patlabor. Patlabor is fairly under-appreciated as a whole, and the manga is probably the most overlooked part of the Patlabor canon. An English translation of the first two volumes (of twenty-two) has been released long ago, by Viz I believe, but they dropped the series after just these two books due to disappointing sales. To see the manga re-emerge in French in unexpected, but certainly welcome. Longtime Patlabor fans must be jumping for joy (I know I felt more than a bit giddy when I first spotted this on Fnac shelves). Kabuto's French edition is even pretty good. Their wraparound covers are a bit too loud for my tastes, but everything else is fine. The printing quality is thankfully very good. The manga uses a lot of thick, dark greys and rather dense screen tones, which could've spelled disaster had the printing been anything less than crisp. But Kabuto've pulled it off nicely. If you've never heard of Patlabor before, this is a good way to sample some of its typical charm - and a good read, plain and simple.