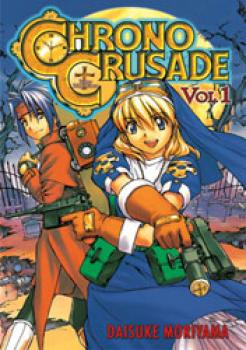 Other items in Chrono crusade manga US

America in the Roaring 20s. On the surface, it's a positive, peaceful time after the violence of the Great War. But lurking in the shadows is a dark element ready to snatch that peace away. Sister Rosette Christopher, an exorcist working as a part of the Magdala Order, has a duty to fight the demons which appear and cause destruction. But along with her companion Chrono, she usually ends up causing more destruction than the demons themselves! On one particular mission, they meet a young girl with a beautiful voice named Azmaria, who is being targeted by her own stepfather. As Rosette and Chrno work to save her, more is revealed about the relationship between them. There is more to these two than meets the eye. 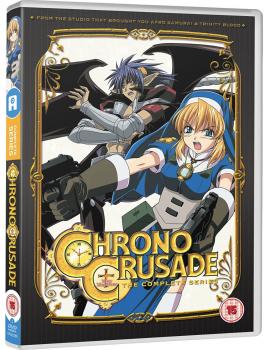 The idea of this manga caught my attention - a nun fighting demons with a demon as her assistant, all set in New York in the beginning of 20th century. Plot isn't that good, and neither is the drawing style, but anyways... I think this is worth reading. (Some say the anime is better. Haven't watched it myself though).

It's the 1920's WW1 is over and Europe has to pay it's depts. And somethimes some of it is 'bloodmoney', With a spirit or demon in it. enter Rosette and Chrono, she's a non he's a demon bounded by her trough a contract. After securing the spirit, and only causing slight damage. (crashing her car, park a boat into statue of liberty) the job is done and they can go back to be scolded at.
On there next mission the have to find out why a really wealty guy put so much efford in acquiring a young girl called Azmaria. This girl has the voice of an Angel or is it an angal with an fabulous voice.

I've heard a lot about the anime-series, so I figured I'd try the manga first (since these mostly look alike in storytelling).

This story is actually great and has an interesting storyline. The manga is both series and has some comedy. It's about a nun called Sister Rosette and her companion Chrono, who has a dark background (which you will found out pretty soon in the first volume of the manga.)
Rosette and Chrono are going up againt a bunch of demons. They have to excorsize them and this isn't happening without some MASS-destruction, causing the head-sister to be angry at Rosette a lot of times (plus creating huge repair-bills aswell....).

This manga begins with ACTION!!! That means we're in the middle of a chase! So, no building up the storyline what so ever. You're directly in the midst of the action!

Eagerly wanting to start with a new series, because either the other series you're reading has finished, or won't have a new volume out soon: Go CHRONO CRUSADE!