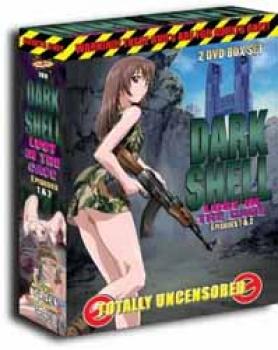 Dark Shell ¿Lust in the Cage- Volume 1: When the Paradise is LostAt the end of World War II, after dividing up the nation, the countries that defeated Japan failed to rule the island. As a result, many independent powers are established, fighting amongst each other and trying to seize control. They developed a hatred of one another, leading the country into a never-ending spiral of a civil war. Our story opens with a gang of soldiers raping Tomoko in front of the other women. The fact is that the women are under the protection of these sexually charged soldiers. The women and the soldiers are trapped in enemy territory, separated from their main force, and they must find a way to rejoin the main force ¿ if they are to survive the war.
Intertwined with Kaoruko's memories of a happier past are shocking scenes, where the soldiers savagely rape and humiliate the women. At the same time, a mysterious sniper kills them off, one by one. In the process, Fukushima, a timid, young soldier, transforms into a brutal beast, after his girlfriend is raped by his fellow soldier and killed by the sniper. Becoming a monster, just like the other fighters, he goes on a rampage, violating the woman he's supposed to be protecting.Dark Shell ¿Lust in the Cage- Volume 2: When the Paradise is LostStory opens as the remaining three women and three soldiers try to make their way to the base of the main force. Thirsty and exhausted, Tomoko asks the soldiers to give her younger sister, Moe, something to drink. Sergeant Kuroda says that if they're going to have a break, they'd need a good reason. This leads to Kuroda and Fukushima gang raping Yuka in front of them all.
After Fukushima's lust is fulfilled, he's shot to death by the sniper, Kaoruko. The story evolves as Kaoruko's dark past is revealed, in which Keita, her boyfriend, is lynched and killed, while enemy soldiers gang rape Kaoruko.
Next, Kaoruko kills Yuka, then Aki, a female soldier. Sergant Kuroda, Tomoko and Moe are the only ones left standing. They finally reach the location of the base of the main force, only to find it deserted. Furious, Kuroda rapes Moe, only to be shot to death by Kaoruko.
The story ends in a parallel world where the nightmare of the civil war did not occur. Kaoruko is with her lover, Keita, on a peaceful beach, watching Tomoko and Moe play.