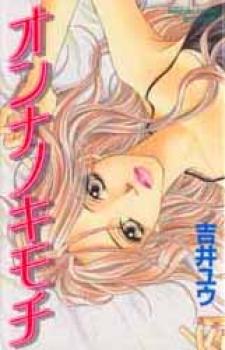 Onna no kimochi are 3 short stories plus a special chapter which show the feelings of women. The stories are very heart-touching and each of them has a surprising ending. Without using too many words Yoshii Yuu surely can express all the doubts and problems of the main characters.

In the 3rd story, "Fushigi na sute neko", main character Youko, living alone in a big city, is not really happy with the sort of relationship that she has with her boyfriend. One day she meets a girl in high school uniform, washing her hair in the public bathroom. Surprised why whould she do that in such a place instead of own home Youko takes out her handkarchief and helps her dry her hair. The girl says she has no place to stay, so she stays at the places of the people who 'pick her up' from the street. And so does Youko - she takes het home. Because the girl has a custom that the person who picked her up has to choose a name for her, as he becomes her owner - like a dog owner, Youko has to choose a name for her. She decides for 'Mii', a name of the cat she had once. And so the 2 of girls are starting to live together and become close friends, even if Youko doesn't know the real age or a name of Mii.

One day Mii is talking about her dream - going to the south island, be able to eat there untill she's full and sleep as long as she wants. In the meaning time, Youko cannot stand the situation between her and her boyfriend,so she decides to quit working where he also works, but in the moment she says that, she gets a ring from him ... She comes back home, happy, to tell Mii about it. Later on, Mii leaves a message she goes to her work, and also during the evening Youko gets a message to go to one hotelroom. As she gets there she sees Mii and her boyfriend together in the bed! Hurted, she gets angry at Mii and slaps her ... but Mii answers she did because she likes her. After a moment Youko realizes that is Mii who she cares for and tries to find her in the city. Next day she find her and from her car asks if she wants to go togeter with her to the south island. Mii happily agrees and tells her real name - which is Mii.