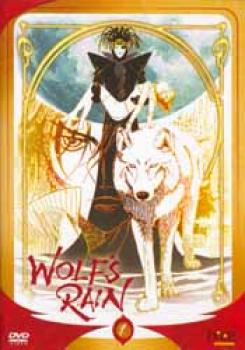 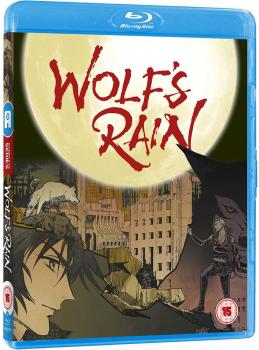 I've heard a lot of positive things about Wolf's Rain, so my expectations were quite high. Even so, I found myself simply blown away by the first four episodes contained on this disc. The visuals alone are simply amazing. The quality of the art and animation is something undreamt of for a TV series, and it remains at a constant high level so far. There's a level of detail and fluidity that's truly a feast for the eyes, with a lot of striking, elaborate designs. I especially found the setting something fascinating to look at. Wolf's Rain takes place in a seemingly post-apocalyptic world where an eneternal winter reigns. People live huddled in domed cities that are packed with immense retro-futuristic buildings. The city where these early episodes take place looks like a cross between Mad Max and Terry Gilliam's movie Brazil, with a pinch of Soviet flavor for good measure. I'm a sucker for these retro-tech kind of worlds, and Wolf's Rain provides one of the most beautifully realised examples I've seen to date. The story so far is fairly interesting as well. Wolves have apparently become creatures of legend in this world. The wolves that still exist are not like the animals as we know them. Instead, they take on human appearance for most of the time. Their real nature and the extent of their powers is still pretty hazy, but the few who know the tales about wolves atively seek them out for some sinister purpose. We follow four of these wolves as they meet in the city and eventually decide to band together to go in search of some vaguely-defined 'paradise'. There are still a lot of unexplained elements this early in the show, but it works to give everything a sense of mystique and wonder. I'm a little apprehensive about the vague elements so far, though. If things like 'paradise' and 'the flower maiden' remain as vaguely defined for too long, I don't see how they can continue to hold one's interest. The show's managed to keep it's sense of mystery at the right level so far; it's just vague enough to be intriguing. And in tandem with the gorgeous, outlandish visuals, it really reels the viewer in. If the rest of the series maintains this level of quality and intrigue, we have a winner on our hands. I certainly wouldn't mind seeing more episodes after such a strong start.