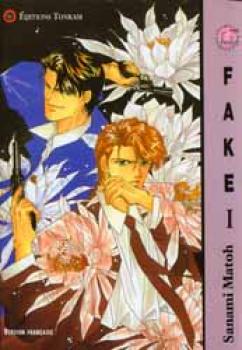 Other items in Fake manga FR

Fake is one of the more popular so-called yaoi titles. I've had mixed experiences with translated yaoi manga. Most of them are all about squeaky underage androgynes, whining bisexuals or sexually paranoid, über-skinny teenagers. I understand these things are ridiculously popular with teenage girls, but I don't really see how any of it could appeal to an adult, regardless of their gender or sexuality. Fake might just prove to be an exception to that rule. Both our protagonists are adults with regular day jobs (cops, as it happens). There's a merciful lack of wide-eyed schoolboys or ridiculously girly men. The 'humourous' bits are, like in most yaoi titles, nothing but characters exploding in mad histrionics at the slightest provocation. Which is something that gets very old, very fast, so I hope Fake will learn to show some restraint whenever the author feels it's time for some wacky comedy. Other than that, this looks like a fairly promising title, but it loses points in my eyes because of a poor job done on the French version. The translation is decent, but picks some questionable methods of spelling character's names. The real problem is the printing quality. Grey tones in the French version look far too dark. Whenever a lot is happening on one page, things start to look like a bunch of indistinguishable dark grey blobs. This makes the first volume a pain to read through on several occasions. Tonkam usually does a fine job with their French manga releases, so I'm baffled as to where things went wrong with Fake. The way it is now, you need a magnifying lens to tell what's happening on any page that uses more than one tone of grey. And there are a lot of such pages in the book.