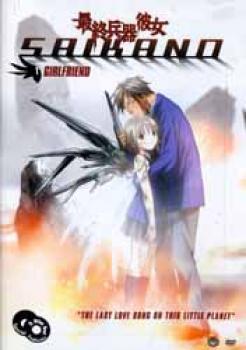 Other items in Saikano TV DVD US

The last love song on this little planet.Shuji and Chise, two high-school students. They've just started going out. One day, while visiting Sapporo, Shuji is caught up in an air raid by an unknown foreign power. As Shuji runs through the city streets, avoiding falling bombs, a mysterious weapon appears and single-handedly wipes out the swarm of bombers. The weapon? His girlfriend, Chise... What do you do when your girlfriend becomes the ultimate weapon?<UL><LI>Episode 1: We Fall In Love<LI>Episode 2: I'm Growing<LI>Episode 3: Together, Alone<LI>Episode 4: Fuyumi</UL> 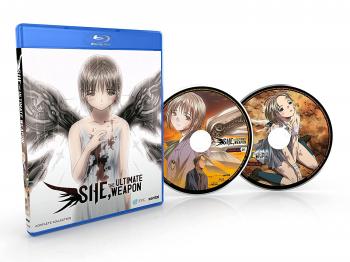 this story is so sad!!:| i almost cryed
this schoolgirl was some kind of secret experment
so this girl has to fight to protect the city ,the love onces.anyway the further i watch the series the sadder it becomes:''|

in other words you will be touched!
when you watch it don't be ashamed even i let a tear go out :)
it's alot better than normal drama you see on TV ... this one is special.
Mecha, romance, drama 3 words that make this story 1.
buy this for yourself or for your friends, family !

Overall
A really sensitive story that touches my heart and makes me cry, like &quot;Grave of the Fireflies&quot;. For me it's a good thing that a story catches my mind and heart.
The beginning is just a bit slow.
The characters progress through the events and each one has a part of the script.

Not only a love story, it's also a story of lives during war time.

I like this serie in the end and will collect the manga.

Animation
The colors are nice.
The animation is unequal but still great for a tv-serie.

Sound
The ending theme, : &quot;Sayonara&quot; by Yuria Yato is magnificient and suits the story. This song has an award.

Story
The story in the beginning seems to be a teenagers romance. It will evolve and be more than that. Emotions, tears, feelings will be waken.

Character
The main characters (Shise &amp; Shuuji) will evolved and others characters are not in the background, they have their own story.

Value
You will not be disapointed.
Don't forget the manga, the story is harder than the anime. Get ready to be touched.

Saikano has to be one of the most shocking series I've ever watched and that it comes from a studio like Gonzo is equally surprising. Following works like Hellsing and Vandread this was a complete change of direction.

What makes this series so saddening, is the characters which the series is very heavily based around. The characters in Saikano have probably the most consistently hard time of any anime cast and just watching the series will show why. Events become progressively worse and you really start to wonder just how bad they can get. The fact that Chise is the ultimate weapon is a very fantastical idea but it's the human problems which this fact throws up and is what makes the series so sad and touching. Chise suddenly has to come to terms with what she is, and the indirect effects it has on everyone around her further complicate things.
There's a huge amount of feeling within in this series and a lot goes on underneath the surface which makes it all the more interesting to watch.

There isn't much of a plot to the series as it's a very character based series but the events and relationships within the series are more than enough to keep you hooked. There are some elements to the plot which the series doesn't go into, like how or why Chise is a weapon, but the series isn't concerned with those facts and instead prefers to focus on the feelings of the characters. A similar example would be Porco Rosso where it wasn't really an issue how Marco became a pig but more about the other events going on. The graphics are very nice as you'd expect from Gonzo and the soundtrack is an interesting and fitting one with several metal style themes which go with the events very well.

Saikano is a rare anime series. The feelings, that the series raise, really start to get to you quite soon and for me it feels like there's a lot of subtle feelings and ideas I've missed on top of that. The sheer tragedy of Saikano makes it a fantastic series for what it is, but that doesn't necessarily make it a series you'd enjoy watching in the way you would something like Mahou Tsukai Tai. But that really shouldn't deter you from watching what, at it's simplest form, is just an extremely touching love story.