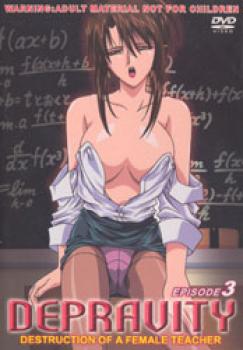 The story begins with Kiriko trying to escape from the den, but eventually she failed and has been captured back to the den, with her arms and feet chained to the wall. The man injected her with plenty of clyster liquid to awake her. She's tried to resist, but didn't work... Due to her constant resistance, another man beats up her. For taking away the pain, they've again injected her with love-philter. And Kiriko's lost her consciousness... then the man started to rape her fiercely. Her memory went back to the past, she remembered that she had been sexually assaulted by a mid-aged man on the train when she was a student long ago. Besides, she was tied up by her admired schoolmate for SM... she was so frightened, their faces showed up in her mind's eye at the same time, she wanted to resist, but the primary human desire has called upon her, made her weak. Finally, she spread her legs and started to moan, she's enjoying the happiness that never felt before, finally she corrupted...30 minutes