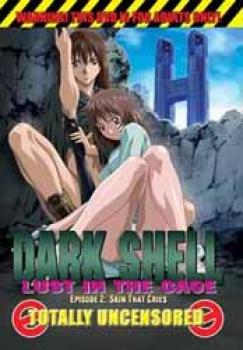 Other items in Dark shell OAV DVD US 1st ed

Story opens as the remaining three women and three soldiers try to make their way to the base of the main force. Thirsty and exhausted, Tomoko asks the soldiers to give her younger sister, Moe, something to drink. Sergeant Kuroda says that if they're going to have a break, they'd need a good reason. This leads to Kuroda and Fukushima gang raping Yuka in front of them all.After Fukushima's lust is fulfilled, he's shot to death by the sniper, Kaoruko. The story evolves as Kaoruko's dark past is revealed, in which Keita, her boyfriend, is lynched and killed, while enemy soldiers gang rape Kaoruko.Next, Kaoruko kills Yuka, then Aki, a female soldier. Sergant Kuroda, Tomoko and Moe are the only ones left standing. They finally reach the location of the base of the main force, only to find it deserted. Furious, Kuroda rapes Moe, only to be shot to death by Kaoruko.The story ends in a parallel world where the nightmare of the civil war did not occur. Kaoruko is with her lover, Keita, on a peaceful beach, watching Tomoko and Moe play.