Lament of the lamb vol 01 GN 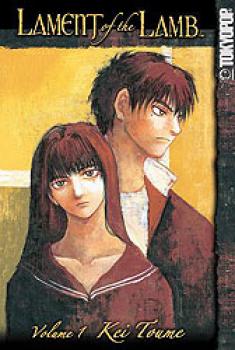 Lament of the lamb vol 01 GN

Kazuna Takashiro can't escape the pain of his past. Ever since his mother died, nightmares and visions have been eating away at him. When he finds his long-lost sister, Chizuna, the two discover they share more than just a family name. The siblings are cursed with a disease of the blood -- a disease that will turn them into vampires! As they resist accepting their destiny, Kazuna and Chizuna struggle to contain the craving that is the very essence of what they will become ...

Lament of the Lamb looked like a really promising title, but after reading the first volume, I can't say that I'm completely won over. There's lots of atmosphere, but the manga has been needlessly talky and aggravatingly short on things actually happening so far.
Our lead Kazuna is yet another bland Japanese schoolboy who's mundane life is suddenly upturned by some shocking revelations. In his case, it's the revelation that he has a sister, and that a strange disease runs in his family. A disease which causes a compulsive appetite for blood... Naturally, Kazuna is upset by this. Especially since there's this tomboyish girl attending an otherwise abandoned art club. Kazuna sorta likes her and she sorta likes him back the way awkward schoolkids do, but now Kazuna is scared that he might start to think of her as a walking blood bank before long.
There, I've pretty much written down everything that happens over the course of the entire first volume. It's all dragged out very slowly. Granted, that does serve to build tension, but it wouldn't hurt the manga to kick things up a notch. Characters tend to flash back to events from just a few pages ago, complete with lengthy expositional conversations being repeated verbatim. This might've worked when the story was still running in magazines. In a collected volume, it often becomes a chore.
The art in this manga is very unusual. Thick strokes and harsh, scratchy lines are used a lot. It gives the characters a rough look and adds to the gloomy, gritty atmosphere. There are strange angles and perspective effects on nearly every page, all in the name of atmosphere. But all the atmospheric build-up in the world won't do you any good without some form of payoff. By the end of volume one, I'm still waiting for a glimpse of that payoff.
There still is the promise of a good creepy story hiding somewhere in there. Some interesting moments involving Kazuna's cocky-yet-creepy sister near the end of this volume do pique one's curiosity. I might be tempted to try one or two more volumes of Lament of the Lamb, but something gripping had better start happening soon.

I red this first manga and I fell in love with it. Soon or later I've bought all the 7 volumes. I do not want to say to much about it. Only if you kinda love serious manga's : read this !