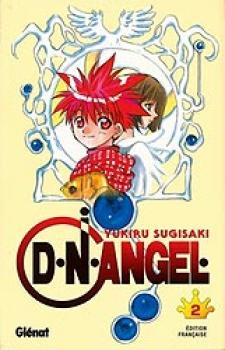 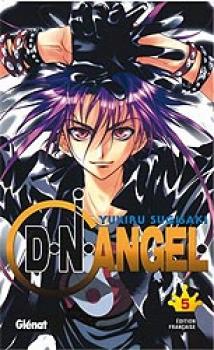 There comes a point in every manga enthusiast's life when things start to feel awfully samey. Wacky romantic comedies? Giant robot shows? Ridiculously drawn-out martial arts romps? After a few of them, you feel like you've seen it all before. D.N. Angel is just such a title. It's a comedy of errors about schoolkids enmeshed in multiple love triangles with a touch of supernatural identity-swapping thrown in to make the hijinks that little bit more wacky. In this case, little Daisuke Niwa involuntary transforms into a taller, handsomer alter ego called Dark. Which of course throws a monkey wrench in about eight different love triangels. Dark is supposed to be an incredibly skillful master thief with some kind of supernatural power. But in two volumes so far, we've seen him do awfully little master thieving. Whenever he does nick an artifact, it happens in one or two pages of confusing running about. Then it's back to fretting over teenage crushes and homework. The only real difference Dark makes is that Daisuke's always fumbling about, trying to keep his second identity a secret while Dark emerges at inopportune moments. The master thief part is really just an afterthought.
I suppose this manga's not too bad if teen crushes and homework still play a big part in your life. For older readers, however, it's hard to really relate to D.N.Angel's characters. They do little more than go to school and fret over crushes, looking cutesy while doing so. The art is pretty, and all the characters look cute, cuddly and immaculately dressed. But for all that, this is just another cutesy schoolkid romantic comedy manga. It's not bad, but it's hardly groundbreaking stuff.
There is one thing that bothers me about this book, and that's the French translation. Glénat seem to've swiped the German version of D.N.Angel and slapped French text over it. Only, they did a rather quick and dirty job with it. There are several moments in volume 2 where German onomatopoetics pop up amidst the French text. Some German has even snuck into the speech bubbles, and it sticks out like a sore thumb. It looks awfully sloppy when text like 'Kreisch!' or 'Falsch!' starts waltzing through a supposedly French edition. A couple of other glaring errors such as text placed in the wrong speech bubbles also crop up. Other than these glaring editing goofs, D.N.Angel is pretty bland so far. I guess that's why the leftover German text snads out all the more sorely.