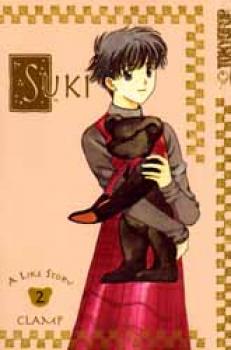 Book-smart but street-hopeless, Hina is determined to get closer to her teacher, Shiro Asou. Ever since he started spending time with her outside of the classroom, Hina's been nothing but smiles. Her friends aren't so happy about the development, and for good reason. Not only is Asou twice Hina's age, but he seems to be hiding a dark past. When strange things start happening around Hina, can she count on Asou for protection...or is being with him the greatest danger of all?

Asahi Hinata is the main character of one of CLAMP's manga, "Suki", which means "to like" in Japanese. The series was mostly drawn by Mick Nekoi, and is the only story that CLAMP have created which doesn't involve some kind of magic or technical wizardry! However, it still has a lot of charm, and it is the cutest friendship/romance manga I've ever seen.

Hina is a schoolgirl who lives on her own in a big house, with no companions aside from her teddy bears Waka and Tono. She has two best friends, Touko-chan and Emi-chan, who tease her as she is incredibly naive and cute, but has very little common sense, despite being an intellectual genius and able to take care of herself.

The story begins when Hina sees a light from the house next door (which has been empty for years), and climbs over the fence to investigate. She falls and her fall is broken by a serious and grumpy looking man. He is Shiro Asou, and turns out to be Hina's new homeroom teacher.

All the girls in her class love Asou-sensei because he is the first young male teacher at their school for a long time, and Hina in her own way loves him, but is not sure what it is she's feeling (being so naive!).

As the story goes on Asou-sensei appears to have a hidden agenda and a past he'd rather forget about. Touko-chan knows that there is something about Asou-sensei that she doesn't like, but Hina is completely oblivious... Why is Asou-sensei so keen to be with Hina, and what secrets are Hina and her friends hiding?