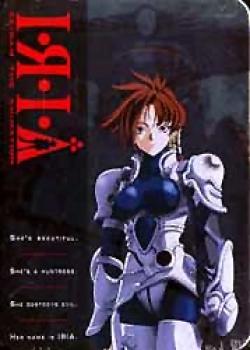 "An outdated sci-fi action OVA from the early nineties." by Villain (Finland) on Apr 3, 2006

Back in 1994 Iria was probably fresh and exciting, but time has not been kind to it. Despite the unique setting, the story of Iria feels old and boring. The hero must defeat a superior foe to settle personal issues and to save the world in the process. If that is not an anime-cliche, I do not know what is.

The OVA tells of a young bounty-hunter, Iria, who fights against a seemingly invincible enemy called Zeiram. The six episodes take us to a couple of different planets and introduce a couple of side-characters to assist our heroine, but not much else. The character-designs are original, especially for Iria, who not only looks great, but is also a rather deep protagonist for an action-anime. Too bad there's only very little development on any of the supporting characters, who are very stereotypical to begin with.

The best thing in the series is without a doubt the wide selection of well designed vehicles, weapons and other gadgets. They are far from the typical sci-fi equipment and instead have a nice retro steampunk feel to them. The weird setting is actually far more interesting than the poorly paced story or the lame action-scenes. I must also mention the many unique and oftentimes hilarious names (Dempadan, Tedan Tippedai, etc) that are used for vehicles and such in this imaginative world.

The visuals have survived the test of time quite well. The animation was certainly not perfect even in 1994, but the amount of movement and literally dozens of different colors in almost every frame make Iria look better than most of its contemporaries. It's a shame the director did not properly utilize the quality of the animation and thus the numerous action-scenes feel poorly executed.

The general lack of excitement can also be blamed on the lame music. Iria must have one of the weakest soundtracks of all anime: slow-tempo "ambient" synthesizer noises might fit a weird art-movie, but they certainly don't fit an action-series. Barely average voice-acting and sound-effects don't help much.

Overall nothing special, just another average anime OVA. Even though this particular DVD-release is of rather high quality, I ended up giving it away after watching it twice. Yet, Iria is certainly worth watching for those who enjoy typical anime-series from the nineties despite their shallow plotlines and other flaws.

This is one title I would really like having in my collection.... and now I have!

This is a classic anime series of 6 episodes.
It has very strong animation and keeps you on the tip of your couch the whole time!

The main characters are going on a dangerous mission which soon will lead into a path of sorrow and horror! From the start of the mission things go wrong and keep on going wrong!
How will Iria put up with all the things that will happen? How will she cope with losses? See it all in this fantastic anime! You wouldn't wanna miss this! At least... I didn't!