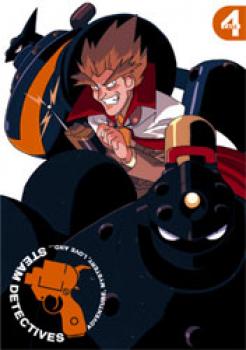 The villains of Steam City are back at it again! First, Crimson Scorpion has an ingenious plan to steal a pair of priceless black diamonds by seducing Detective Onigawara. Then, Ling Ling's slick sister Lang Lang is determined to be "an angel in black" for a sick little girl, fulfilling her last wishes... even if it kills her! Nothing compares, however, to the death and destruction that Knight Phantom wreaks when he goes on an underwater rampage in a stolen submarine! Can Narutaki stop this dastardly plan before Steam City is engulfed in a sea of flames?