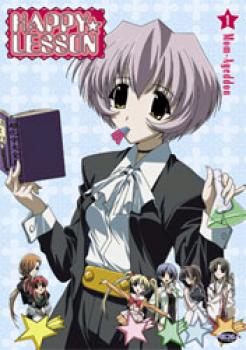 Chitose is living every teenage boy's dream. So why is his life a nightmare?

What teenage boy wouldn't want to spend his days surrounded by a pack of beautiful women? Chitose, that's who! He just moved out of the orphanage and back into his deceased parent's house. But instead of lounging around the ultimate bachelor pad, he's dodging discipline from his five new mothers! His high school teachers have adopted him, and the only thing that overshadows their good looks is their near-psychotic maternal zeal.

Just look at what they've got in store for him. When Chitose starts failing his classes, Mutsuki dons a sexy tutor outfit and beats the knowledge into him. Then Yayoi detects a spirit of misfortune inside Chitose's body and decides to remove it by force. And of course, there are the contents in which his mothers compete to win Chitose like some kind of grand prize. How could any young guy hope to survive all this?

Find out in the first hilarious volume of Happy Lesson!