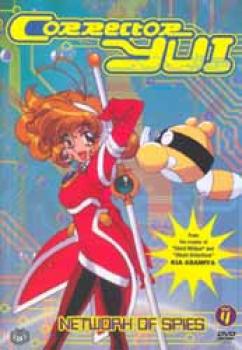 <UL><LI>Episode 15 - Investigation on the Orient Express
Aboard the famous Orient Express, Yui and friends are challenged by Virus to solve the mystery of a kidnapped IR. Unless Yui can follow the clues and solve the case, the train will crash into the station. Will Yui be able to find IR in time, or is this the end of the line?<LI>Episode 16 - Jaggy's training course
A relaxing Sunday afternoon at a Virtual Reality athletic park turns into a test of courage and strength when Jaggy corrupts the network into a dangerous obstacle course. The lives of her friends are in danger. Can Yui get to the finish and find the strength to pull through?<LI>Episode 17 - The howl of war wolf
A computer-virus experiment goes awry, causing Virus, Jaggy and Freeze to get transformed into mysterious entities. When the virus-infected Corruptors stubbornly refuse his help, War Wolf must make a difficult choice between deleting his comrades, or turning to Corrector Yui for help.<LI>Episode 18 - Double "O" Yui, Rookie spy
In search of the last Corrector software, "Synchro", Yui and friends find themselves on Spy Net. When it seems as though a spy named "Q" may actually be the software they're looking for, a race ensues to see who can find "Q" first. Will the Corruptors beat Yui to it?</UL>